Skip to content
Posted on May 27, 2016 by Stephanie Monka Springborn Posted in Uncategorized

I grocery shopped today in one of those crazy busy one store-does-it-all type mega-stores that I am supposed to despise.  I love it.  I see people employed and, where else could one not only buy pantyhose but lettuce too?  Shopping there is like diet soda.  Love it but do not make a daily habit of it.  One of my best experiences there was on a particular weekend day when one should avoid going, I did.  Grumpy at my lack of planning, yet still following my own routine of parking so to at least get a good walk, from far away I noticed a gentleman outside the doors.  He was wearing the bluest of blue sweatshirt – as bright as the color which adorns the store’s signage.  No, brighter.  Mind you, I was grumpy, with more concerns on my mind than I could possibly solve, the brightness of his sweatshirt felt somehow hopeful…and then he turned around.

Still proceeding to the sliding door entryway, not hesitating, I was face to face with the man in the bright blue sweatshirt with…. Superman.  His bright sweatshirt was only made brighter by the blaze of a red and yellow S.  Superman.  I passed him, smiling until not twenty steps away, my appreciation of all things commercial abruptly did the 180…  A Mennonite lady was leaving this store.  There she was, dressed in long skirt and covered head.  Both of them, not twenty steps apart, a superman and a superwoman,  each from distinct,  separate worlds, yet connected here in the doorway of one of thousands of ‘super stores’.

The roses of Pentecost have wilted their way today into the compost pile.  On the other hand, today I bought garlic.  Today I held my second business meeting with myself.  This time at my building I named ‘Matthias’.  I seem to have lost a year in my recollections, remembering what life was, a year ago, two years, three years, many years…  This building I adored, even projected my own journey upon its bricks, through the time in which I would crawl under the garage door  to completely replacing that roof.  It had been slated for demolition, this handsome building that had been an armory, a technical school and more business enterprises than I have fingers. How many dreams had this building held?  How many loved it, despite leaky roof, messy interior and a history oddly perfected with both question and honor?

At my second business meeting, I listened to the street below, in this building I adore.  I realized how easily I had fallen into the same thinking on the opposite end of the spectrum, all on my own with no one to blame but myself.  Why would I think that this path would lead me to a magic door of instant transformation?  I had told myself that message over and over:  It is one brick at a time, Steph.  One step at a time.  Yes, those words were spoken between head and heart and soul in meetings of dreams and in the board rooms of ones own prayers.

I am not sure, truthfully, how it happens.  Perhaps out of exhaustion one stops looking for the magic door.  Perhaps I realized how lucky I was to be standing in the hallway of many doors.  G-d did not give me the magic door.  Thankfully!  He gave me a hallway full of them with the promise of guidance as I place my foot over the threshold.  Even if I run back to the hall.  Still there….

During my daily walks at work I had been greeted by a goldfinch’s insistence that he belonged on the other side of this window.  Twice a day, almost every day, he would fly against the glass, tapping as he flapped up the pane.  He would fly away to perch in a nearby tree, then return again.  Same process.  (The symbolism is disgusting perfect….) I admit I could not leave him alone, on the other side of the glass I would scold him or tap back.  He would hop over a few panes, sometimes he would not care in the least I was there, continuing the flap-fly procedure.

I don’t really know what causes a person to change, not even for myself.  But I do think, for some reason it is the daily habits a person carves oneself into.  And most of the time, the lesson to be learned or the change that needs to happen seems to have nothing at all to do with what you are doing.  Because I pray, does that make me more holy? No!  Because I wear a dress, does that make me more a woman?  I don’t really know how to answer that one.  Maybe it has more to define me as a person in such habits as my slow drive home after work.  I pull over to let people pass.  I watch the sun dip low into the west, outlining the silhouettes of barns and tractors.  I sing loudly and badly to my dog Wally.  And I drive…. 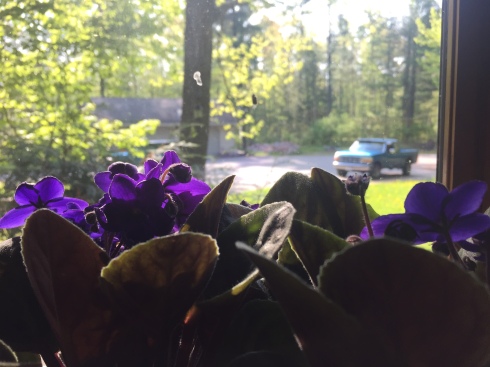 I think it is on those travels and in those walks that change occurs.  Upon what does a person place their focus?  Sometimes a daily routine means “thank you, G-d, for getting me through another day.”  Sometimes each step means realizing you hold your chest up a little higher than the day before because yesterday you said “thank you, G-d, for getting me through another day.”  And then the following day you might hold your chest up higher and….then it would have hit me with tears..then a person might remember years ago…. a person might remember a time when every step I took hurt.  As I walk today, I might remember two days ago, thanking G-d for getting me through another day while I also recall limping down a very real school hallway;  gasping as I shifted books from one arm to the other, the pain zapping every joint in my legs.

I smile and keep walking…

I do wonder, though, at the extend to which I needed to learn lessons.  Did the severity of illness, even if it is one of ones own soul, prescribe the severity of treatment?  In other words, is there truth to the biblical “losing ones life in order to gain it?” Paradoxes…

One thought on “The Walk. The Talk.”