Skip to content
Posted on February 6, 2017 by Stephanie Monka Springborn Posted in Uncategorized 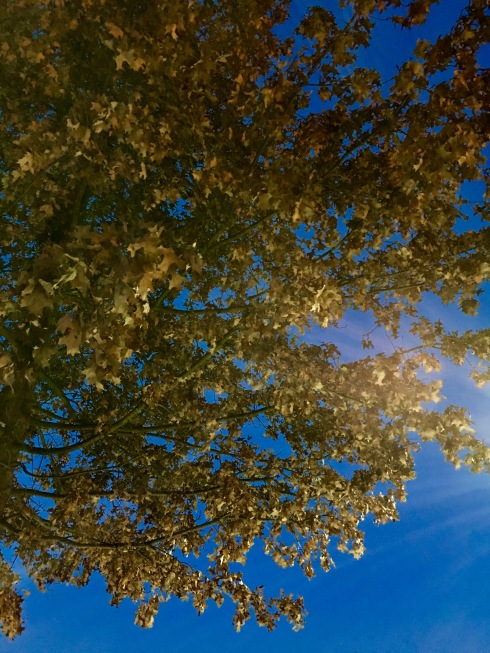 First, I orchestrated “Bohemian Rhapsody” among my band of scrub oaks…I instructed them with all the off-keyed imperfection that one could muster.  My voice scratched as the nerves of shyness tore away at my soft-voiced inadequacies.  They deserved so much more than me, a woman who could barely remember the words on a good day in my Jeep, much less unaccompanied now with only misguided memory as a tuning fork.  Took me maybe five minutes to realize they could not care less.  The brows of their branches raised slightly at me.  Or so I thought.

Until the wind came.

In the echoes of the wind among the soldiered, columned oaks, I sang braver and louder and, of course, more off-key and of greater coarseness. The trees remembered too, how to dance as the wind straightened and bent their stretches… Soon I forgot entirely that I was never much of a singer to begin with.  I stopped, there, in my own midnight glow of joyous madness.  I stopped, quiet now, to listen to the trees bending back to face the wind who picked the pace of its own song.  I stood quietly, for once, not just not singing, but my head stopped its constant whirl of worries.  My soul stopped, my brain paused.  In fact I had to check after awhile to see if I was breathing.

Their bark glistened in the polished moonlighted.  Their branches, some barely extending above my head bowed to me, then to each other, as the wind carried majestically the twinkling of Chopin… a warm remembrance chillingly shared as the notes grazed fingers across ivories of stilled-life grasses.  The tapped notes called to our attention as now it was we, the trees and I.  And so the dance began.  If I had sung melodies with bravado, then I danced equally so.  So rarely in life does a person forget even oneself, with music of a wind only one can hear.  Well, one and the trees.

I thought of the waltzing ballads of gowns and jewels and suits with pants legs sharpened by the steamed blade of a professional iron.  I was not sure if I remembered the steps correctly or not.  I was astonished at the self-awareness, at my own awkwardness as I began with the music only amplified within, knowing I could only hear it.  Only when I stopped looking at my feet and when I stopped looking at the safety of the ground, to look up once again, did I realize that they did not mind.  In fact, they seemed to be bending and waltzing along to a music I could not hear but somehow we met.

Ah, but the slope to climb…I will admit to an indulgence of a “salsa turned rockstar” dance before the slope, before I stopped dancing.

I had tired myself out.  Oh, the music inside me played on, and I called up my inner Beyonce, but enough was enough.  It was night now and somehow that inner music guided me through the grove of scrub oaks.  Oh, this slope to climb was steeper than I thought.  Messy. That is the first thought that came to my mind.  What a foreign concept – as if I did not already look like a strumpet cast aside by all humanity.  My indignation and I sat down.  Rocks, mud, and a bit of early slushy snow… The tonic of Mother Nature…

I sat looking at the oaks, my many partners of dance….still brilliant in their uniforms… I cried wondering how many times I had cried.  Tears of wonderment at the forest path which seemed so far away yet whose battle scars I still could see embedded in my own flesh.  The deepest wounds were tucked inside.  Tears of terror as I remembered the terrors of the field…fear of the open field in which I was the highest man on the food chain, but all around me were reminders of the cycle of nature, of predator and prey, hawks and mice, wolves and bunnies. I cried.

(No matter how many times I pride myself on knowing the term, I know I am most certainly misusing it and not caring a bit that I am.  I am actually, given the term, probably ‘jumping back over the shark’ which is really…um, pathetic.  I am dreadfully and thankfully…uncool.)

Her name was Brenda.  No, she is not a lover, not a friend, not made-up.  During a business conversation like thousands of usual conversations one has over the course of a year, a drumbeat of the Blessings of sameness, that a calm came over me.  During this, a wave among waves upon a shore, its independence remarkable in that it is a piece, a part..unique, but a speck. It was a moment that washes over a person.  Doing the same things, saying the same words.  This time, it was real tears which began.  It was not a conscious effort.  I had tried to manufacture the feeling probably thousands of times in the last few years in the most meaningful spots I could pick.  The shore, the buildings, at home, with family, at church, driving, in the woods, and in the cemetery – all spots I would have thought I could have recognized the sighing of my own soul.

Oh sure, there have been those moments, but none with the surety that my own calm was not of my own, but a piece of what I was living.  No, it was in the middle of a conversation at work in which I felt water welled in the corners of my eyes.  I knew, my soul knew, for the first time in years and quite possibly the first time in my life, that I would be okay.

Days ago I had received news, very good long awaited news, which of course caused an immediate emotional response.  In the days since I had been numbed.  A fight if you will, was over.  Did I win? It always had mattered, then suddenly it did not.  But perhaps I can only say that because I did.  I think.  Does it matter?

A day before the news I had learned what I thought to be my “final lesson of this stage of my development”.  (Go ahead laugh. I did too.) I learned that my instincts sometimes might cause a panic.  My brain might race with answers to questions posed by circumstances of the interactions one has with the world, but there came a calming.  Well, not really. Sort of. Kind of. But I found I could fight the panic.  I did not react.  I could think.  My gut would churn and my head race, but I could protect myself finally by not reacting.

I always knew I was patient.  But this time I was patient with myself.  It was perfect timing.  The good news came.  I bubbled briefly, and then…. I was quiet.

In those two or three uncomfortable days I did my usual things – there was nothing out of the ordinary.  I did not splash about nor did I celebrate wildly as I had imagined.  In fact I was not sure I was happy.  I realized that was a good thing but not out of the training from youth when one hears the message to beware of good news because there is always something bad to follow.  No, I stopped believing that.  I had started to believe in the positive.  That there was reason to believe that the hardships..well, I could let go of them.  I could let go of struggle.  I could let go…of me.

And I let myself go.

I would be okay.

Blast it.  I had a slope to climb.  Every expletive I had ever know raced in and out of my mind. I had been through the forest, with its camouflaged wicked meanness.  I had practically crawled through the vulnerable nakedness in the field.  I had stumbled down a slope to dance with the uniformed oaks and now..to my wonderful tree, the last hill to climb…. I was a worn out, dirty horrible strumpet with bad knees.. I had to now climb?

I placed my hands alongside my body.  Twisting carefully to lean into the hill of mud and rocks to boost myself to begin again, step by step..

A root.  A giant exposed tree root, embedded not two feet away from where I had been sitting, then popping up like an embroidered street on a map…I crawled, grasping at rocks glued into the mud by frosted mud.  The cold arm of the tree root…my tree…there it was…a root… waiting to help me climb.

But of course I could not just crawl and climb.  A thought remained…I wondered…I realized the power of stretching oneself beyond the limits a person sets for themselves.  I had stretched beyond, I don’t know.  Over and over and over..for years.. I realized now how wonderful a process.  And equal to wondering at the celebration of good news, I had had this image of what I would be like as a person at the “end”.  There is no end.

But it changes.  And comfort changes too.

But I had stretched.  And I wondered today and knew at the same time…. I would not return to what I was.  And that was the next scary part.  I did not know what I had become.

And that what was stretched out of me…