I found a key numbered ’46’ at Matthias.  Upstairs, among the demolished interior walls which now lie in chunks like ice flows upon the concrete floor, I had been staring at my future office studio when I saw the rusted backing of a coat hook still anchored to cinderblock, just as it had for the past seven decades.  I thought to myself about how I had clutched to different people, things and times in my life.  Clutching never works well in the long run.  Everyone wishes to say that are above such behavior but this is such a lie.  We are conditioned for it.  There are times in ones life that all you can do is grasp on tight to weather the storm, no matter if it a storm of bad circumstance or the weathering of ones own personal growth.

The clutching, although embarrassing is meant for just that, the weathering through it all.  It has taken me a life time to realize our conditioning or even the threat upon such behavior.  As a woman there is always the unstated threat that if you are genuine and if in that genuineness you find yourself at odds with mainstream expectations, well then you are wrong.  If you do not change, if you do not clutch or cling then you will find yourself – gasp – alone.  You will end up alone.

I am hoping I have finally learned that to make the choice is making the choice.  (From years ago, I do have a tendency for Yogi Berra-isms).  Like marriage in reverse,  I do not give up my choice.  It is an unconditional vow to the peace of my soul.

Perhaps the vibrations of the jackhammering or the blunt force when the interior walls fell loosened the screws, but between the rusted hook’s plate and the painted plastered cinderblock stuck a rounded piece of steel, relatively untouched by the years.  With a screwdriver and my fingernail tips, I picked hopefully until the object started to slide.  I had imagined it was someone’s secret spot for a locker key.

My world blued in a matter of days.  Not with sadness but with a reluctant vibrancy in imitation.  I had forgotten how quickly the rest of the world changes from celebrating Christmas with heated reds upon plaids and golds and silvers.  No matter what your favorite colors of Christmas, there is a warmth.  Maybe it is the hope of evergreens.

But within a day of the holiday, the world seems to turn icy blue.  Lights get dimmed and decorations get tucked.  Every year I fight it but I am happy to discover there are in existence, others who hang onto the reds and greens, that warmth and celebration despite a return to work and other daily activities, who return home after a day to a Christmas house.  At least until the twelve days of Christmas have passed.

It was two days until the new year when I decided to set my goals for the coming year.  Within fifteen minutes – bam, done.  I had been rather cocky about it all, spouting to the cross on the wall in my combination kitchen/dining/living room which,  in the home design philosophy of the 1990’s was called a ‘great room’.  (This same layout may or may not now be called ‘open concept’).  It is open and I think it is great but the main feature when I plan and hold meetings with myself is that I can spout to the cross on the wall while pacing a bit.  I have enough room to get it all out.

So I spouted for fifteen minutes.  Tongue in cheek, inspired by the magnificent bravado of Christmas, I laid out, aloud, a list of goals I had for the coming year.  Stopped me right in my tracks when I heard the slight echo of ‘my plan’.  Doggone if I had not done it.  Fifteen minutes.

“Es,” I asked in a softer tone than usual, a bit breathless from our brisk pace. She turned to me in a somewhat startled mode as we had walked for hours without saying a word.  “Es what is that mark on your back?”

We had been walking side by side until the path narrowed.  We quickened our speed in a delight of the ease of the path.  There was nothing to do or ponder.  The path just needed to be walked.  As I took my place behind her, she had turned, absentmindedly checking on me.  As her torso turned, the shirt covering her back untucked, catching the wind.  There, in a jagged line parallel to her spine, it looked like a scar from a decades old kidney operation.  I had never seen it before.  The scar furrowed her softened skin into a shiny pink ridge.

“It looks worse than it is or was”, she said, of course adding her smile.  I had not seen the scar before.

“Years ago a watch dog attacked me,” she explained.  “I had gotten in between it and its master.  An innocent mistake of just being at the wrong place at the wrong time.  The dog had almost been looking for a reason to attack.  That was decades ago.”

She continued.  “When I dove between the two beasts, the shadow beast, the beast of many had lunged at me.  I was lying face first in the mud, protecting my head and my heart, but its tooth, while aiming for my spine, caught on the ridge of the scar.  I could feel the immediate heat from blood rushing into the trench.  I did not know how deeply the beast had dug into my flesh.  I did not know if they got my spine or not.

“But I never saw blood…” but my words drifted as she turned to face me.  Es had this peculiar fashion notion to wear shirts backwards.  There, on the front of her shirt were the smudges of chocolate reminiscent of the bloodied wound.

She smiled and I had wished briefly that she would not.  But in her smile I saw something new and remembered something else new.  She had not cried.  Not now in the retelling nor for the last hours we had been walking.  She had stopped crying.

“I remembered the voice, the cries of the beasts.  As I lay in the mud I waited for kindness.  I had hoped at least one of them would show the others how to help.  I had been lying there, bloodied, and even though they showed no remorse nor any indication that they should feel remorse, still I had hoped.  I knew one of them would call out to the others, to instruct them to be kind, to demand that they halt their attack.

Instead the voice of the beast mocked me.  The one voice I had waited for, was no longer.  The beast knew I would never retaliate – I would have never believed its duplicity.  I do not think the beast knew I heard it, but I had.  I had heard his words.”

To be fair, Mother Nature urges me along.  I know it.  Steph, the rest of the world is going on to January aka “White Sales / Inventory / and pre-Valentine (don’t even get me started on the ‘Love Holiday.’)

I decided – well, that is not true – I am letting my project lists dictate an elimination of the past.  My Epiphany is once again, ‘my epiphany.’

For New Years Eve, I grilled and baked star shaped sugar cookies in honor of Epiphany.  At my age I am rather ashamed of myself to admit that I ate so many of them that when I awoke in the new year, I smelled like a rather giant, albeit delicious vanilla-like, cookie dough woman.  Frightening.

In Wisconsin, the first extended cold snap wrings out any color other than the chilliest crispest blue.  The moon is no longer white but a blue gray as its light filters through sky-born particles of ice.  The bark of trees stand solemnly with the grey of dormancy.    Ah, just a few more days of the robust reds. 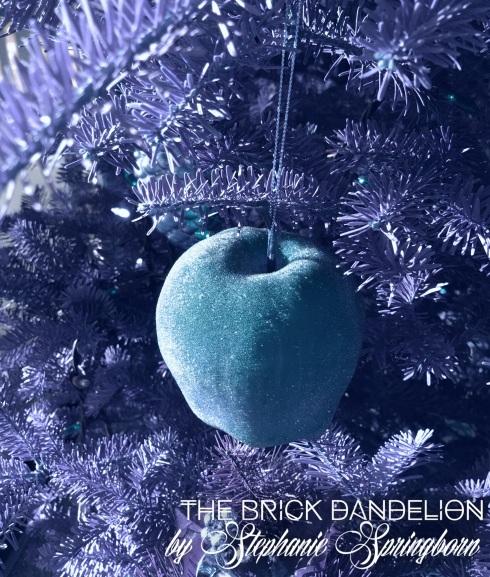 Months and years it has taken me to come to this point.  That retaliation is not my suit.  Neither is tribulation.  And, to wit, neither is justification.  I

Secretly I have looked forward to this time of year and particularly, this time of year for this year.  As I correct myself, clean my home, make small improvements (aka replace the toilet seat),  I think I am going to roll around – amore – at home in my gumdrop red, vanilla white and evergreen home – knowing that temporarily I am dreadfully passe with the rest of the world who is fashionably into the whites and cool blues of January whether in ice storms or waters of tropical escapes.  And, for a few days I might be privately at my own height of fashionista with earthy geometric print leggings, christmas socks, olive green button sweater and a spring floral blouse..

(I have a lot of deep freeze work to do).

May your 2018 be icy blue moons and sultry blue waters.  May you know the robust red of life love and the soothe of evergreen.

And everything in between.

Love. Lots and loads of love.