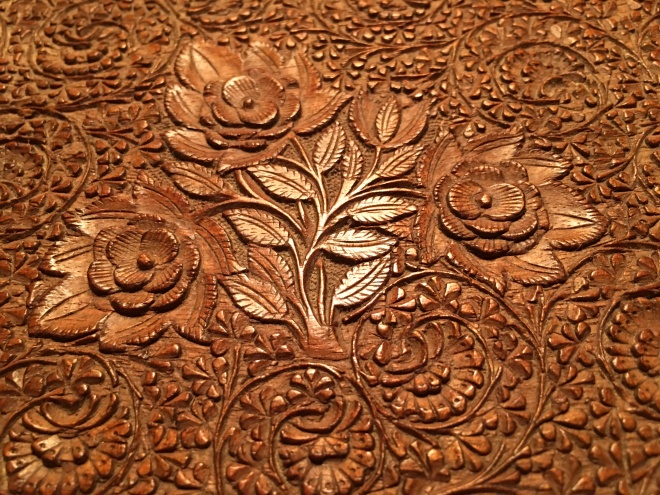 …I stand in the clearing, imagining my laughable appearance.  I must look like a caveman!  I could feel my hair encrusted with sweat, dirt and unnamed bugs.  Still, I can laugh.  I smell of stumbles against tree bark and clutches of leaved branches which guided my path.  I laugh at my thighs and arms whose striped scratches mix in a cocktail of raspberry blood.  A person could draw a map of the path, naming each scratch with the bend in the trail, every misstep clearly etched upon my skin…

The week marked one year of working at my current job.  Working for my life and working to live my dream with my own business.  A year of both recovery from myself and discovery of myself.  One whole year…  Two years ago I was beginning my tenth year of teaching.  Or so I thought.  Three years ago I was in distress with my second knee injury while in desperation trying to prove my worth.  Four years ago I was reeling from the death of my father and caring for my mother.  Five years ago I was fighting for survival amidst loneliness and helped my mother through cancer.  Six years ago I had recovered from another knee surgery, saw my mother go through illness, and took care of my husband who had been hospitalized for a week with a blood clot.  I learned about giving shots of warfarin in a beautiful bruising pattern around a belly button target.  It was the same summer my father fell, never to walk again and both my mother-in-law and father in law passed away.

Forget me.  My son was right there too.  Through it all.  It was not all bad, but the years took their toll.  With some, it would glue a togetherness between partners.  For my husband and I, it did not.  Everything was a fight or a contest.  And nothing was simple.  I wanted so badly to be tethered during those storms, to have a guidepost provided by marriage or a partner.  It was not until my last knee surgery did I realize there was no one hanging onto the other end of the rope.  I was unknowingly, dangerously adrift…

But that was years ago.

In fading laughter I turn to retrace the last of my stumbling steps which had forged through the last bit of fallen branches and thorny berry bushes.  I know I had broken those branches purposely once I saw the brilliance of daylit spots through the canopy of leaved oaks and maples.  (I had not watched survival television shows for nothing.  I was prepared.)  As soon as I had seen those spots grow larger, I had known my path was bringing me to the clearing.

Okay, truthfully I told myself all along with stubborn resolution that I was not returning on the path.  I never had it in my head to return.  Ever.  But I was still marking the path, breaking branches along the way.  I would wonder, later, at my thoughts during that time.  With each perilous step, with each rock upon which I chanced to tumble from, with each tree limb that I either learned to shinny over or crawl under, I marked my way.  Why?  I would later wonder why.  Did I really believe…well, I am not quite certain I ever understood the path with each step and each rock and each limb.  I do not know that I would have continued the painstakingly effort of care for each step without the safety of the marking of the trail.  Maybe the past was the only tethering point.

I re-examine my scratches with a mixture of the reaction of my inner hypochondriac and the pride of a survivalist.  In my head, I am a ninji of the woods!  I laugh again at the wild imagery.  I am fine.

For days I remain just outside the line of trees who govern the forest’s silhouette.  Scrubby poplars and hopeful pines dot the invitation of raspberry bushes which kneel beside the treeline.  Hidden in grasses left unattended by human hands I sit, kneel and sleep, invisible below the seeded tufts which crown the blades.  With each recounting of my steps I see the grasses I had bent with heavy plodding steps, now perked themselves up.  I had fallen a few times as my feet regained balance and my stride regained momentum, freed from the tangled tree roots of the forest floor.

With each day’s passing of sun and night’s watch from stars, the path back to the raspberries, through the kneel of the poplars and honeysuckles became swallowed by less time than it had taken to navigate.

I am such a dope!  How could it be that what took me so long, took nature a few days to erase?  Indignant at such a thought I swore at the moon.  I wore the scars of the path and now it is gone?  I have raspberried blood on my clothes and upon my skin.  I have bugs in my hair.  I have mud where no human being should have mud!  How dare my path be erased!

I fell asleep, there, in the tall grasses, with the hum of soft wild forest noises blown effortlessly through the seeded tufts.  I could feel the steps of the path within my bones.  Every step ached through my muscles and every fall had been recovered with bruises in the most psychedelic of purples, yellows and greens.  Yep, I was a regular beauty queen!

In the morning I awoke, barely able to stand.  Forget the ninja crap, I am fifty-one.  The realities of …..  Wait.  I start on all fours, like an animal, in the dawning sunlight.  Slowly I raise my knees to walk my feet to my hands.  And I stand.  I am standing to see above the grasses for the first time in days.  I look away from the treeline.  I had not been dreaming.  There it is.  The ‘My Tree’ which is not mine alone.  I look back to the woods.  With a mix of awe and sadness I thank the good Lord for the sight of one broken branch.

Can I walk?  Clumsily, but yes.  And I begin to walk again, with legs and a spirit engraved by the wooded path.

And a few purple-yellow bruises.  Just to keep it all ‘in check’, you know?