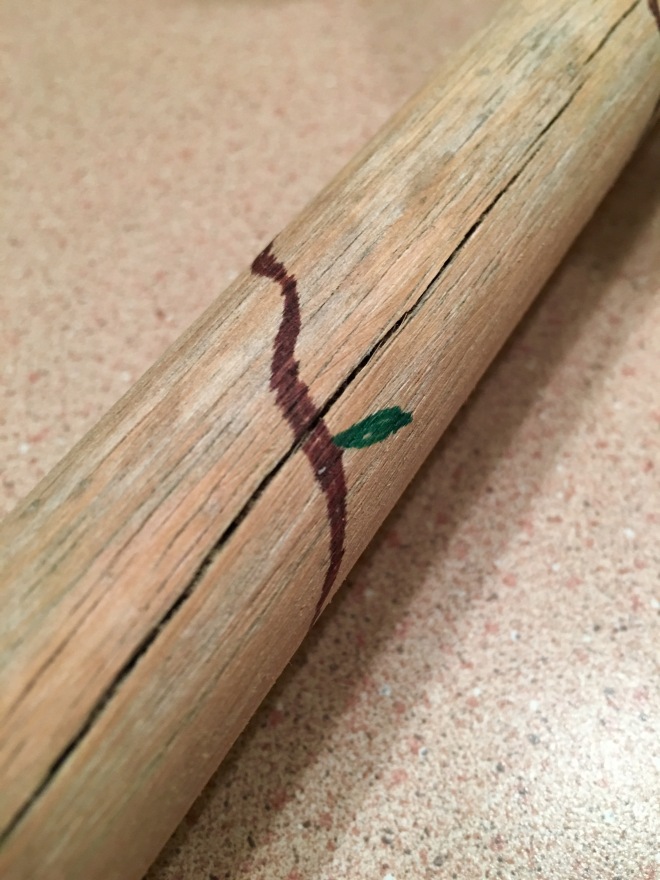 Posted on September 11, 2016 by Stephanie Monka Springborn Posted in stories of a beautiful life journey, Uncategorized 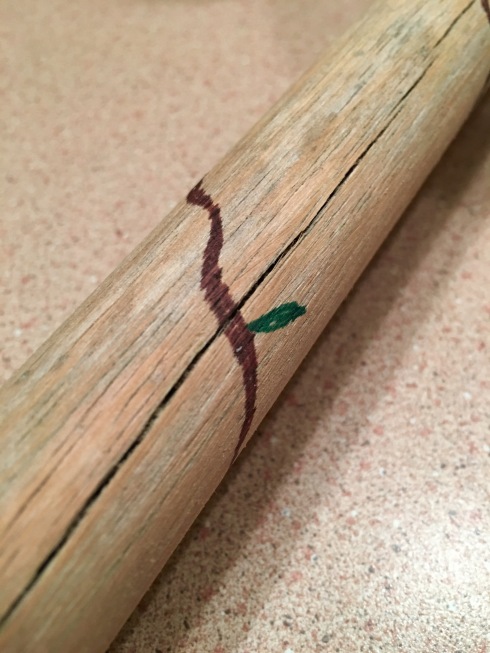 It’s a frightful beginning, is it not?  I had many plans of grand adventure on this Saturday, out and about, scurrying to checkmark my to-do lists.

But the whole summer has gone by without my wooden flagpole hanging off the deck.  When one of the fasteners released the bottom end of the flag, I took the whole pole inside, wishing to decorate it with designs and generally flowering it up a bit.  Why today?  Partially due to the sadness of the coming memorial day;  partially because I have been thinking about the creative process and maybe even a bit of the privacy of it.

With each day, I marvel at the peace.  My son even remarked at the absence of conflict and strife during one of those conversations which parents flip to have with their children.  Or, really it is those types of conversations which anyone wants to have with another human being in which it feels like you talk through your whole world in a matter of minutes that stretch to hours.  It is the talk of comfort and understanding with ones philosophy and beliefs, mixed with laughter and a few tears.  It is one of those invaluable conversations in which the world around you feels all right. (And as a parent, you want to savor every loving morsel, talk even more all the while with a secret dread that you do not wish to say the wrong thing.. My secret mom prayer:  Please G~d, guide me so I don’t muck this up!)  Yet, in those kind of conversations, a person’s heart knows that there is never any wrong thing to say.

It was one of those conversations you have side-by-side with another human being.  Oh, the face-to-face ones are grand as well, but the side-by-side ones? Well, it is as if for one precious life’s moment, two paths are not joined together, but they are actually journeying, if only for a bit, together, in the same direction.

In these days of peace, I told my son as well, that a person’s motivation changes.  It should not seem so difficult to live ones life, as gentle as usual, but not in response to crisis, fear, hostility or anything negative.  What happens when ones life becomes a manifestation of ones own heart?  That should not seem so different.  A gentle heart, made stronger and wiser by the turns of life, is now learning how to express itself, how to maintain, and how to navigate in this new world.

I haven’t worked with tools or wood really since last fall when I was hurrying to block the windows at the building.  Four southern exposure, second story windows, each approximately 100 inches by 120 inches needed to be boarded in preparation for the coming Wisconsin winter.  So I climbed ladders, teetered in front of open, second story spaces to construct frames that were both strong enough to withstand the outside gusts of wind and strong enough to carry the weight of the wood necessary to cover the openings;  yet, were also light enough that I could handle them alone.

And I did it.  It wasn’t pretty.  It wasn’t “This Old House” perfect.  But I learned of saws and hammers and drills.  At least as much as I could handle at the time.

Today, with the memorial of tomorrow’s happenings, I wanted to work on the flagpole.  I knew it would never be as I imagined it, but I started.  I started a project for me.  I know how silly and pathetic the story is, but for me, I am unsure that I even realize how large a step it was.  I grabbed my sandpaper to smooth the weathered wood. (Equally important – I returned it to my workbench!)  I began to color it with markers because honestly, I knew I had enough ‘umpf’ in me for the project, but I was not confident I would actually clean any brushes.

Hours later I have a flagpole with poppies, Blackeyed Susans, vines and all sorts of symbols of my choosing;  completed, then hung back in its spot by my son.

In many ways the whole day reminds me, again of my ‘knee lessons’.  I remember how walking and running sideways made my legs stronger to move forward….

Blessings and Love… May you walk your path backwards and sideways….and with many markers of many colors. (The markers are critical.)