Skip to content
Posted on June 27, 2016 by Stephanie Monka Springborn Posted in Uncategorized

I took my tax information to the accountant with great apprehension since it’s my first time as a divorcee and first time as a business.  Then my purse was stolen. But I got it back.  I had a glorious twenty-four hours last weekend in which I was responsibility free – I declared a vacation of removing the roof panels on the Jeep, the open highway, a renewable Energy Fair, and an overnight stay in a motel with a pool.  I had planned on finishing that weekend with a brief interlude of power shopping.

Since my trip began with “power-packing” in which I stuffed my favorite blankets along with an overabundance of clothing in the biggest suitcase I own, I hit the highway two hours later than I intended.  The Energy Fair was one of those mini-bucket list events of mine:  Always delaying it for the next year. So I went, swapping my everyday concerns for an indulgence in the science of solar panels.  I knew no one.  I did not feel like I “fit in” which caused me to wonder why I would even need such a displaced notion in the first place.  My attendance was about wondering and wandering.  I just followed my own curiosity as I walked among the exhibits of solar panels, vapor barriers, organic farmers, conservationists and windmills.

The whole trip felt like a first time even though I have traveled many times alone.  This trip was different, like jumping on the bus for summer camp when you are twelve years old with the misgivings of leaving home and the exciting intrigue of the unknown.  It was a baby step, combining familiar highways with unfamiliar purpose.  By the time I reached my motel I had to choose between one hour of swimming and sushi.  Swimming won.  I even thought I could do both. I probably could have found a sushi bar at ten-thirty on a Saturday evening.  Dressed in a Saturday summer dress, I hopped in the Jeep feeling incredibly feminine, dignified, cosmopolitan and… whole.  I was going to brave the nightlife.

But it was ten-thirty. I just wanted fish.  McFish won.

As I ate that scrumptious sandwich a wild thought passed through my vacation mind.  I could shop in the morning or…… I was only forty miles from Lake Michigan.  Forty miles from the shores of the lake in which I have loved since childhood.  My parents were raised there.  My brother and I spent summers and many weekends there.  I was forty miles away.  On a Saturday evening anything seems possible.  Nah, I am fifty years old and I have my plans.  I will shop in the morning.

But I awoke to a beautiful Sunday morning with the lingering coolness of night beginning to be sliced apart with the arrival of the brilliance of sunshine.  I could eat my free continental breakfast, gas up the Jeep, and be lakeside by ten o’clock.

I removed the roof panels of the Jeep.

(Twenty-seven Blessings and counting… I hope you have twice as many!) 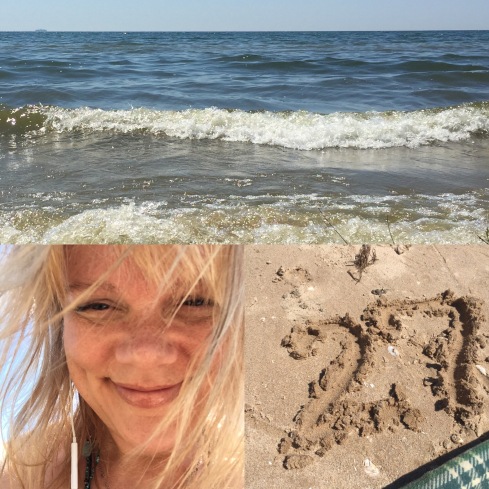